I’m really new with the tool and I would love to know if there’s a way to do what the title says, I want to extract every element of every precomp in my active composition at once (or one by one, but automatically)

For context, I transfered 500+ text files from Premiere, but I need them to be released from their precomp and need to do it fast.

There’s this plugin called Un-PreCompose which is really useful, but It can only work one layer at the time, also need to select an option and then press ‘Ok’. So I managed to do only one line where it activates the plugin with the Action > Menu Command option (Because it is on the ‘Layer’ drop down menu) BUT, to make it work, I need to make it able to select the second option you’re given (Which discards every motion from already existing precomp so the extracted layer won’t have any) and then I have to make it press ‘Ok’. Then move to the next layer and do those three things again. And so on until it’s finished. 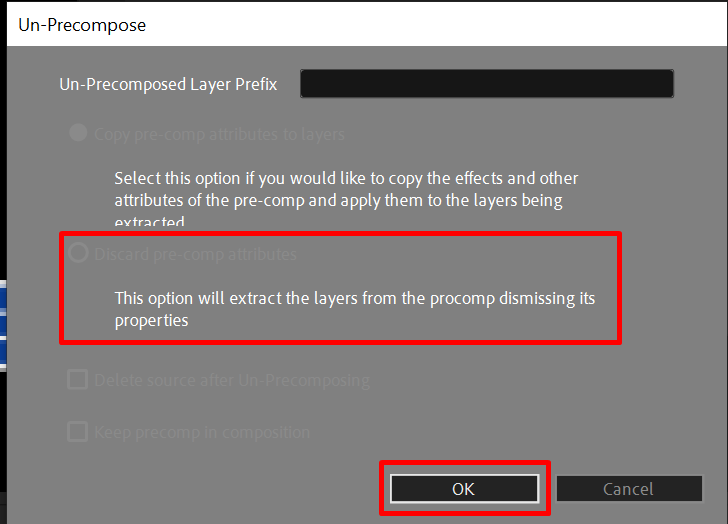 I was wondering if any of that is possible, if there’s another way to do the same or if you have any suggestion because I really need to speed this up hahaha my job kinda depends on it,

Thanks a lot in advance and sorry for the bad english

Hi @franztomandl , Welcome to the forum!
if your job depends on it I take it very seriously.

I think I can reproduce the un-precompose functionality easily and in only 5 lines!

the menu command method will not work for you, you can’t click on menu settings after running a menu command automatically.

let me know if you have more questions,
Alon

Holy moly. I’ve been looking for this for so long. I’m really glad I found you guys. In another topic I also had a question, and that’d be the next step on my workflow hahaah It’s about creating Keyframes. I hope you can also reply there!

Thanks a lot for this. This alone was really helpful

Great! I am glad it worked well.